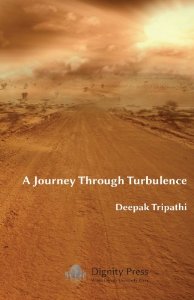 A Journey Through Turbulence is a collection of Deepak Tripathi’s writings in the last decade, covering a vast landscape and many subjects, from the United States, Britain and the European Union to conflicts in South Asia and the Middle East, the Arab Awakening, the power shift from west to east, and the new great game in the east. Displaying a keen knowledge of the landscape, these essays have an insightful analysis of the present in the context of the past.

“In his long career as a journalist and researcher, Deepak Tripathi has developed a deep understanding of the Middle East and South Asia during the Cold War, and America’s place in the post-Soviet world. These essays, written at a critical time, make a very significant contribution, because they provide both an overview, and depth of knowledge, of current problems. This book should be widely read.” ––Grace Feuerverger, professor of education, University of Toronto, and author of Oasis of Dreams: Teaching and Learning Peace in a Jewish-Palestinian Village in Israel and Teaching, Learning and Other Miracles

“Tripathi writes with a degree of bite on the important issues of our times, covering the end of the Bush era to the start of Barack Obama’s second term. These essays provide a searing commentary of U.S. foreign policy, and its failings from Iraq to Libya.” ––Dr Binoy Kampmark, RMIT University, Melbourne, and formerly Commonwealth Scholar, Selwyn College, Cambridge University

“Lucid, imaginative, and intellectually independent, Tripathi provides a panoramic view of our recent turbulent history that is almost three dimensional. He has a rare ability to discuss historic events in a vast political landscape, without ever losing his central argument that war, humiliation, and injustice cannot bring peace. This book should be read by everyone.” ––Dr Evelin Lindner, founder of the Human Dignity and Humiliation Studies Network, and professor of humanities and social sciences

“Deepak Tripathi gives scholars and activists alike an excellent understanding of what there is to know about what we know. He shows us whether our theory of knowledge comes from colonialism or universalism matters, and that this knowledge alone can help the peace process.” ––Ruth O’Brien, professor of political science, CUNY Graduate Center, and author of Out of Many, One: Obama and the Third American Political Tradition 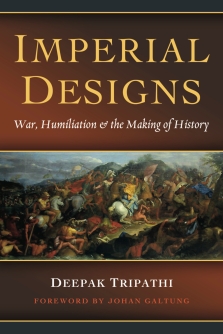 Potomac Books, imprint of the University of Nebraska Press, 2013

Since the age of Alexander the Great, waves of foreign armies have invaded the Middle East and South Asia to plunder their vast treasures. In Imperial Designs, Deepak Tripathi offers a powerful and unique analysis of how this volatile region has endured the manipulation and humiliation of such wars. He argues that these foreign invasions to gain access to others’ wealth and the consequent ignominy of the defeated peoples of the Middle East and South Asia have far-reaching consequences.

Over the centuries, again and again, the conquered peoples have been left helpless, their shame on open display. The victims’ collective frustration has strengthened their will to resist and avenge the wrongs done to them—all according to their own values and in their own time. Displaying a keen awareness of Middle Eastern and South Asian cultures, Tripathi argues that this enduring theme resonates throughout the region’s history and informs the present. Referring to declassified official documents and scholarly works, Imperial Designs offers an authoritative analysis of Middle Eastern history since the First World War and the fall of the Ottoman Empire. Scholars, policymakers, and concerned citizens should read this book, for it tells us how the shame of defeat radicalizes nations and societies, and often makes future conflict inevitable.

Historians have long noted the sense of loss due to conquest in the Middle East and South Asia; Egyptian President Gamal Abdul Nasser’s redemption in the 1956 Suez crisis, for example, placed him as the first modern Arab political “winner.” Former BBC correspondent Tripathi (honorary research fellow, Univ. of Roehampton, UK) here completes his trilogy (Breeding Ground, CH, Nov’11, 49-1729; Overcoming the Bush Legacy in Iraq and Afghanistan, 2010) on regional violence, using a meandering yet readable approach to illuminate historical alienation for today’s Western audiences. The sense of humiliation persists in the plight of the Palestinians, the Jewish Holocaust remembrance, the suffering of prisoners under indecent American treatment at Iraq’s Abu Ghraib prison, and among the region’s ethnic minorities. Yet humiliation as an all-encompassing explanation lacks precision; is every violent outburst due to long-standing trauma? Are Afghanis more or less humiliated than Iranians? Is west Asian humiliation more telling than African, Latin, or East Asian cases? This brief book, focused on contemporary policy, with illustrative appendixes, alerts readers to the problem, but affords few precise distinctions or clear remedies. Policy makers may yet learn from these experiences: show respect and, as consistently as possible, reverse the sense of victimization. Summing Up: Recommended. General readers, undergraduate students, and professionals. F. S. Pearson Wayne State University

“Tripathi’s excellent summation of past events in the Middle East and his cogent analysis of their continuing implications should be required reading for all who are dealing directly with this troubled region, as well as those seeking to understand it and its relations with the United States.” –Ambassador (ret.) Greta Morris, American Diplomacy

“What Imperial Designs mainly offers [is] a realization that the history of other cultures can, and will, impact the result of our actions toward them as much as the employment of any other means of influence, including our most powerful and destructive foreign policy tools.” – Military Review (January-February 2015, p 143)

“Tripathi, a British historian and journalist, examines the dynamics of imperialism in the Middle East during the modern era. He focuses on humiliation as a tactic of inducing subservience that also has the tendency to provoke more radical reactions by the humiliated.” –Book News Inc.

“More than a trenchant analysis of recent U.S. foreign policy disasters, this important book helps us understand the potent role of humiliation in international affairs.”––Mark Juergensmeyer, director of the Orfalea Center for Global and International Studies, professor of sociology, University of California, Santa Barbara; and author of Global Rebellion: Religious Challenges to the Secular State

“Much we still need to learn about the social and psychological consequences of the globalized imperialism of the sort that the U.S. and its allies perform at unfathomable cost to human dignity and civilized life. Deepak Tripathi’s Imperial Designs: War, Humiliation and the Making of History is an excellent study in that critical direction. His knowledge of the terrain is vast and detailed, his perspective realist––his gaze irreducibly humanist.” ––Hamid Dabashi, Hagop Kevorkian Professor of Iranian Studies and Comparative Literature, Columbia University; and author of Post-Orientalism: Knowledge and Power in Time of Terror

“This elegant and original tour de force reveals the often forgotten emotive and violent effect Western imperialism and colonialism had on the peoples of Western Asia. A Must read for our times.”–– Ilan Pappe, professor of history, University of Exeter; and author of A History of Modern Palestine: One Land, Two Peoples

“A seminal book that shows how perilous it is to overlook dynamics of humiliation in politics, particularly in times of increasing global interdependence, when crises can only be overcome through cooperation. It is the very strategy that is undermined by the humiliation of arrogant domination.”–– Evelin Lindner, Dr. med., Dr. psychol., professor of social sciences and humanities; and author of Making Enemies: Humiliation and International Conflict 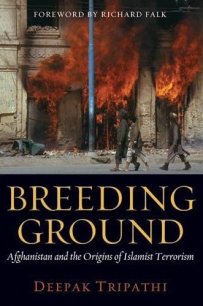 Beginning with the Communist Saur Revolution of 1978 and continuing through Gen. David Petraeus’s 2010 appointment replacing Stanley McChrystal as commander of U.S. forces in Afghanistan, this book is an inside account of one of the most vicious conflicts fought between the two Cold War superpowers: the Soviet war in Afghanistan (1979–89). Analyzing the behind-the-scenes decisions made in Moscow, Washington, and Kabul, former BBC correspondent Deepak Tripathi shows how that conflict transformed Afghanistan into a sanctuary for terrorism.

Explaining how Afghanistan descended into a civil war from which the Taliban emerged, Tripathi explores the ways in which the country ultimately became a grotesque mirror image of the anticommunist alliance of U.S. forces and radical Islamists in the Cold War’s final phase. Calling for a departure from the current pursuit of military strong-arm tactics, he advocates an approach that is centered on development, internal reconciliation, and societal reconstruction in Afghanistan.

“The most authoritative and insightful study on the subject, traces the cause squarely to Soviet and U.S. invasion and occupation.” – Gary Olson, professor, Moravian College, Bethlehem, Pennsylvania

“Tripathi describes how Afghanistan’s role as a Cold War battleground between the occupying Soviet Union and US-supported radical Islamists fighting Soviet occupation and the subsquent civil war from which the Taliban emerged helped set the stage for Afghanistan to emerge as a sanctuary for terrorism … reconstructs the political and military developments from 1979 onwards, including the consequences of the decisions made in the capitals of the United States and the Soviet Union.” – Reference and Research Book News Journal

“Concise yet powerful … details the interlocking decisions and strategies that inflamed the conflict.” – Foreign Policy Journal

“Political-military history of modern Afghanistan that’s sharp and to the point.” – Palestine Chronicle 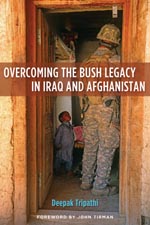 The military adventure that George W. Bush embarked on within months of his inauguration in 2001 was to eclipse everything else in his presidency. His name will forever be synonymous with the “war on terror.” What  started as a military response to al Qaeda’s attacks in New York and Washington on 9/11, with the goal of neutralizing al Qaeda and its Taliban hosts in Afghanistan, quickly fused with the neo-conservative agenda to dominate and reshape the Middle East. Al Qaeda’s terrorism was answered by the terror of American military power, which has destroyed or blighted the lives of millions in Afghanistan, Iraq, and Pakistan.

Deepak Tripathi, who has kept a keen eye on the region for more than three decades, identifies systematically the naive calculations, strategic and operational blunders, disregard for history and for other cultures, and even downright prejudice that have brought so much harm to so many. The legacy of Bush’s foreign policy will take years to overcome, Tripathi argues. His war on terror provoked resentment and violent opposition, opened up sectarian divisions, and created Hobbesian conditions of war of all against all. The long-term price tag for America has been estimated at a colossal $3 trillion, but as Tripathi seeks to demonstrate, the overall cost, in human and economic terms, will be incalculable.

“No less of an indictment of the consequences of Bush’s decisions than it is survey of how his administration came to believe that political problems can be solved by military action.” –  Jon Roper, Cambridge Journal of American Studies 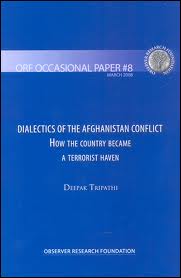 The last three decades of the twentieth century were a period of intense conflict between competing ideologies. That conflict was played out in Afghanistan. The clash of capitalism and communism, both essentially western ideologies, magnified the internal divisions within the tribal system in Afghanistan. This paper looks at the chain of events during the Cold War and examines the impact of East-West rivalries on Afghanistan. It provides a historical analysis of the rise of the Islamist group, Taliban, and Afghanistan’s transformation into a terrorist sanctuary. 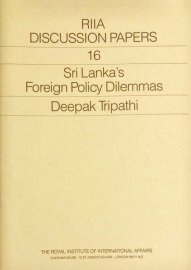 Sri Lanka’s foreign policy dilemmas analyses three major factors that determine Sri Lankan foreign policy: the ethnic and socio-economic structure of the country; its location in the area of great strategic importance and military rivalry; and the role of India, immediate neighbour and regional supwerpower. In coclusion, the dilemmas faced Sri Lanka in the conduct of foreign policy are considered.

All acts of violence involve a degree of terror. Where peace and order prevail, the mix of coercion and incentives has gained a broad consensus and institutions are available to citizens to challenge the existing measures. It is the basis of legitimacy.

A condition in which violence permeates all levels of society and becomes part of human thinking, behaviour and way of life.

When the fog of hatred is thick and the lust to have it all becomes uncontrollable, it is difficult to recognize that humans throughout history have shown extraordinary capacity to harm fellow humans.
My Tweets