In 2017, the United Kingdom continued to experience the trauma of the previous year’s referendum on the country’s membership of the European Union. The advisory referendum in 2016 had split the country almost evenly. A year on, divisions brought out into the open have started to work through. We are witnessing the economic and social aftershocks of the earthquake which the narrow victory for leaving the EU produced. A new battle for Brexit is on.

Schisms are around us to see. Between those who want the UK to remain integrated with the rest of Europe — and those with a fanatical determination to disengage from Europe in all but trade. Europhiles, on the one hand, are nervous about becoming too dependent on the United States as President Donald Trump reshapes America in his own vision. Fervent Eurosceptics, on the other, have no qualms about that prospect. Voices of reason are often drowned in the shrill and narrow nationalist rhetoric of a disorderly group claiming to have a majority, albeit small, behind them. 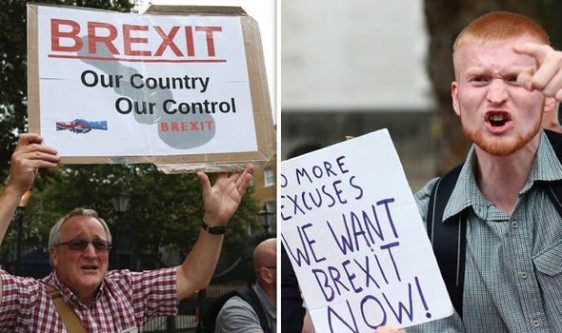 Often described as “Remoaners”, “traitors” and “enemies of the people” by Brexiteers and the right-wing press owned by media tycoons, onetime pro-EU Britons are becoming resigned to the inevitability of the country leaving the European Union. British businesses, anxious about the prospect of tariffs and long queues at border points, have been warning the government repeatedly. The UK currency has declined sharply since the 2016 referendum. Economic growth, too, is declining as migrant workers from Eastern Europe leave Britain in significant numbers.

Foreign companies such as Honda, Nissan, Toyota and BMW, banks and financial services, are making contingency plans to relocate before the United Kingdom leaves the EU on 29 March 2019 if no free trade agreement appears in sight by the exit date. But negotiations, which normally take years, are not expected to begin at least until the end of March 2018.

The British negotiating team has just completed the first phase of talks with the European Union. The aim was to finalise a deal on three major issues: the UK’s financial settlement when it leaves; the status of open border between Northern Ireland, which is part of the UK, and the Irish Republic, an independent country within the EU; and protection of the rights of EU citizens in the UK as well as UK citizens in the 27 other EU countries.

No sooner than the UK Prime Minister, Theresa May, announced the agreement paving the way for the second phase in which complex trade negotiations could start, the Brexit Secretary, David Davis, said that promises made by the UK in just concluded talks were “not legally binding” and they were “meaningless”. His remarks made the remaining EU 27 members furious, for it meant a lack of good faith to the EU and perhaps the rest of the world.

The boast of Brexiteers since the 2016 EU referendum that “we will have our cake and eat it” has caused anger throughout Europe. Too many in the British government, in Parliament and the populace remain oblivious to the unalterable geographical fact that the United Kingdom is surrounded by EU countries and these countries remain united in their approach to Brexit.

Sharp divisions afflict the United Kingdom. Prime Minister Theresa May’s full cabinet rarely has discussions on government policy or the final destination when the country leaves the EU. Ministers express their disagreements openly in the public. Individuals freely announce what looks like policy without consulting others in government, sometimes to be rebuked by the Prime Minister.

Her cabinet is dogged by allegations of sexual misconduct. The Defence Secretary, Michael Fallon, was forced to resign for “falling short of acceptable standards”. The International Development Secretary, Priti Patel, resigned after holding a series of unauthorized meetings with Israeli officials during a private “holiday” visit. Most recently, a third minister, Damian Green, has also resigned after an official investigation into allegations of sexual misconduct found that he had breached the ministerial code.

Theresa May’s Conservative Party MPs are uneasy about the high degree of control exercised by a right-wing minority of Brexiteers and 10 MPs of the Democratic Unionist Party (DUP) of Northern Ireland sustaining her in power. In early December, a small number of Conservative MPs rebelled. They voted against a clause of the EU Withdrawal Bill that would have given ministers sweeping powers to change laws without parliamentary approval.

Despite every conceivable tactic to entice, cajole and pressure those threatening to oppose, the government was defeated. Since that vote, rebel MPs have received death threats which are a matter for police investigation. Parliament regained power to scrutinise the terms of any withdrawal agreement negotiated with the EU. The opposition Labour Party is purposely vague about what kind of relationship it wants with the European Union after exit for fear of losing votes among both supporters and opponents of EU membership at the next general election.

The Brexit referendum whipped up a lot of hostility against immigrants. Crime statistics show a marked increase in attacks against, and harassment of, ethnic minorities such as Muslims and people of East European backgrounds. Angry Brexit nationalists and white supremacists tell those who do not look English, or who speak a foreign language, are told to “go back to your country”.

Under-the-surface tensions have always existed in British society and erupt from time to time. Following the referendum, unrestrained chauvinism, including official threats to make the environment hostile for immigrants, are becoming accepted norms. As the political debate degenerates, courts and European human rights instruments are left to serve as the main bulwark against further descent.

Steve Bell in the Guardian

A country in crisis due to political failures often tends to evoke the past and embark on a journey to imagined greatness once again. When those dreams are not realised, anger and frustration follow. As the United Kingdom approaches the New Year, the country is at that point. For a small country of 65 million, with about 150000 active military personnel in total, including a navy and an air force of some 30000 active personnel each, the Brexiteers’ vision of Britannia ruling the waves means having to carry heavy load indeed.

All acts of violence involve a degree of terror. Where peace and order prevail, the mix of coercion and incentives has gained a broad consensus and institutions are available to citizens to challenge the existing measures. It is the basis of legitimacy.

A condition in which violence permeates all levels of society and becomes part of human thinking, behaviour and way of life.

When the fog of hatred is thick and the lust to have it all becomes uncontrollable, it is difficult to recognize that humans throughout history have shown extraordinary capacity to harm fellow humans.
My Tweets